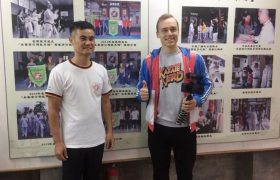 Jesse Enkamp, the Karate Nerd, well-known to Karate enthusiasts for his blog and website “karatebyjesse” paid a visit to the Weng Gong Ci Martial Gym. Initially having been told that Karate was Japanese (by the Europeans), then Okinawan (by the Japanese), and finally that it is of Chinese origin (by the masters of Okinawa), Jesse […]