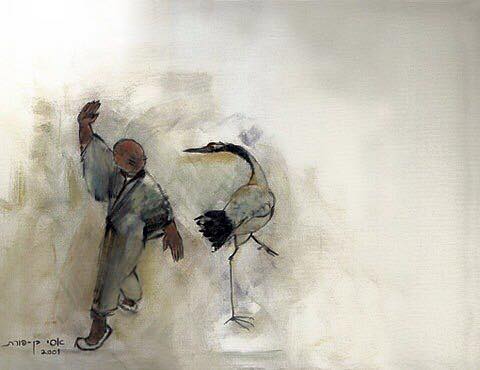 Legend has it that during the Kangxi time of Qing Dynasty in the middle of the 17th century, in a temple located in the Bai Lian temple, out of the north gate of Fu Ning region, there was a woman named Fang Qiniang, daughter of Fang Zhong, who was a disciple of Shaolin Kung Fu. Her father had taught her martial arts from an early age.

One day, while she was weaving in the temple, a white crane flew and rested on the roof, perking its head and flapping its wings, dancing and playing with its alas, using its beak to peck its own feathers, holding out its neck to search for food, twisting its neck to take a rest. Fang Qi Niang was very surprised with its amazing gesture. Then she threw a box on it, but the white crane easily dodged it; she continued to use her ruler to attack it, but once again the attack was effortlessly deflected; after that the white crane opened its wings and flew high into the sky.

Astonished by the crane’s skills, Fang Qi Niang thought to practice with it on a daily basis. Eventually she recognized the significance of the crane’s movements, and began incorporating them into her training Shaolin pattern, developing a characteristic fighting style, namly White Crane.

Since then Fang Qiniang taught her art at the Bai Lian temple and became very famous. She was named “famous teacher of the world, heroine of the nation” and taught countless students.